About the New Kadampa Tradition

KMC Madison is part of the New Kadampa Tradition.

At the heart of the New Kadampa Tradition is the practice of Kadampa Buddhism, a lineage which started with Buddha himself and then traveled through India and into Tibet. The lineage came to the West in 1977 with the arrival of Buddhist Master, Geshe Kelsang Gyatso Rinpoche. Geshe Kelsang has been a key figure in the flourishing of Dharma throughout the world. He founded The New Kadampa Tradition in 1991 and has since opened 1,400 centers and branches worldwide, composed 24 books which have been translated into many languages, built World Peace Temples in various countries, and established study and meditation programs geared towards modern people.

When Geshe Kelsang arrived in the West, he quickly saw that a revised presentation of Buddha’s teachings was needed because the traditional Tibetan style of teaching had limited suitability with Westerners. Geshe-la was granted permission from his teacher, Kyabje Trijang Rinpoche, to modernize the presentation of Kadam Lamrim of Sutra and Tantra. And so, Modern Buddhism was born.

In his book by the same title, Geshe Kelsang says:

“Although the instructions presented here come from Buddha Shakyamuni, and Buddhist Masters such as Atisha, Je Tsongkhapa and our present Teachers, this book is called Modern Buddhism because its presentation of Dharma is designed especially for the people of the modern world.”

The scientific basis of Buddhism

Buddhism is still relevant 2.500 years after its point of origin because it is founded on a scientific observation of the mind and the methods that can be utilized to improve it. Specifically, Buddhism is concerned with what is consciousness, what types of consciousness produce happiness and which produce suffering, as well as methods to cultivate the former while removing the latter.

Geshe Kelsang explains this at length in Modern Buddhism:

“The instructions given in this book are scientific methods for improving our human nature and qualities through developing the capacity of our mind.”

By practicing Buddha’s methods sincerely in the laboratory of our own minds, we can produce the same results he achieved, and attain a completely purified state of enlightenment or Buddhahood, in this very life.

For more information on the methods to achieve this, download Geshe Kelsang’s ebook, Modern Buddhism. This extraordinary text is the culmination of his life’s work – Buddhism presented in a modern way without any cultural overlay, which makes it accessible to all people everywhere.

Or simply join us at any of our classes where we engage in the methods taught by Buddha to realize our potential. 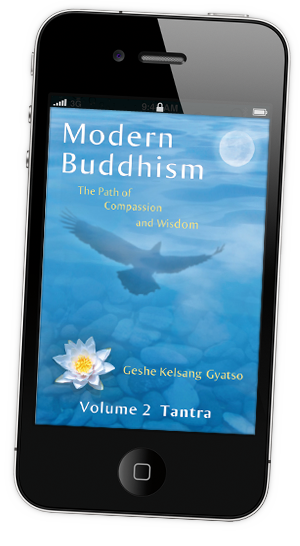 “I pray that everyone who reads this book may experience deep inner peace, or peace of mind, and accomplish the real meaning of human life.”

Find out how you can
transform your life