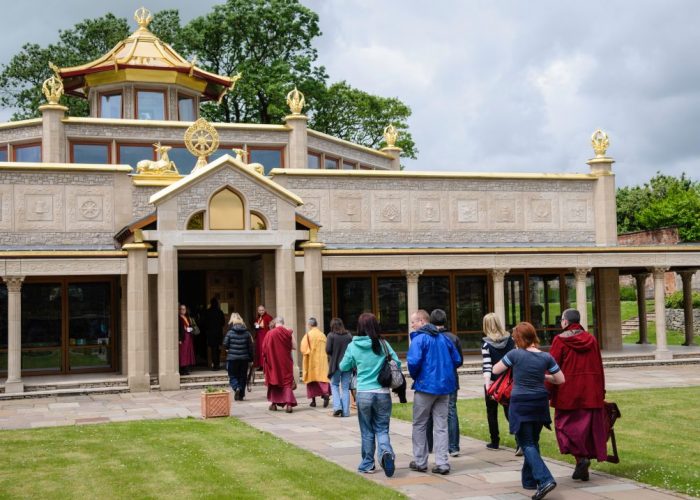 The first Saturday in April is set aside to commemorate the founding of the NKT-IKBU by Venerable Geshe Kelsang Gyatso Rinpoche in 1991.

The occasion is marked by special events, pujas and dedications at Kadampa Centers worldwide. Prayers are made for the flourishing of Kadam Dharma throughout the world so that all living beings might quickly find permanent inner peace.

Above all, we remember the extraordinary kindness of Venerable Geshe Kelsang in founding the NKT-IKBU and pray for him to remain with us for a very long time. 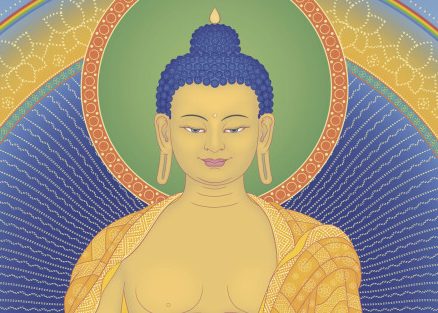 April 15th marks the anniversary of Buddha Shakyamuni demonstrating the attainment of enlightenment in 589 BCE. This is an extremely important day in the Buddhist calendar because our actions are 100,000 times more powerful than on other days.

This event is marked by special purification and fasting retreats in Kadampa Buddhist Centres worldwide based on the practice Drop of Essential Nectar. This practice, which is done in conjunction with Eleven-faced Avalokiteshvara, is very powerful for purifying negative karma of body, speech, and mind, and for pacifying strong delusions such as desirous attachment and hatred. It is also a special method for receiving blessings and improving our experience of love, compassion and bodhichitta. 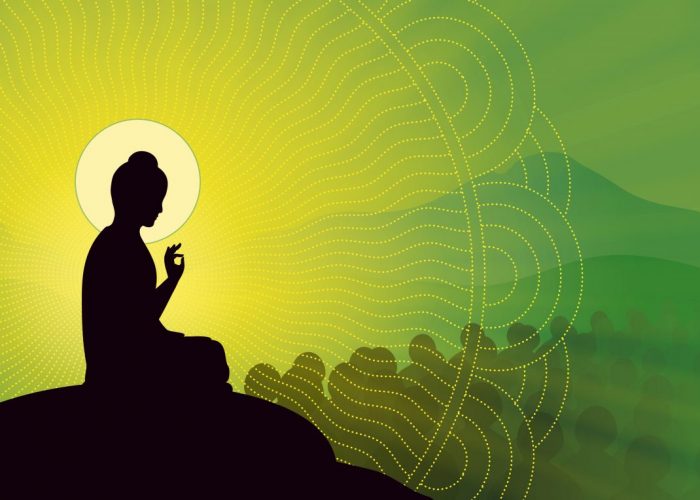 Turning the Wheel of Dharma Day

June 4 marks the anniversary of Buddha’s first teaching in this world and also the birthday of Venerable Geshe Kelsang Gyatso, the Founder of the New Kadampa Tradition (NKT-IKBU).

Forty-nine days after Buddha attained enlightenment, as a result of requests he rose from meditation and taught the first Wheel of Dharma. These teachings, which include the Sutra of the Four Noble Truths and other discourses, are the principal source of the Hinayana, or Lesser Vehicle, of Buddhism. Later, Buddha taught the second and third Wheels of Dharma, which include the Perfection of Wisdom Sutras and the Sutra Discriminating the Intention, respectively. These teachings are the source of the Mahayana, or Great Vehicle, of Buddhism.

It is because of the great kindness of Buddha in turning the Wheel of Dharma that the people of this world have the opportunity to follow a spiritual path to the permanent inner peace of enlightenment. Without these teachings there would be no path for us to follow and no possibility of bringing our suffering to an end.

To commemorate this special day, Kadampa Buddhist Centers around the world hold special events with prayers for Buddha’s teachings to flourish in this world for a very long time. 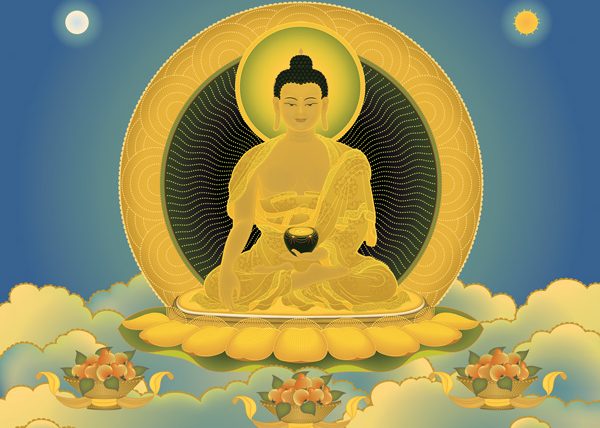 September 22 marks the celebration of Buddha’s Return from Heaven Day.

The following explanation is an extract from a talk given by Venerable Geshe Kelsang Gyatso on this day in 1991:

‘On this day we celebrate Buddha’s return from the desire god realm called Land of the Thirty-three Heavens, where he had been to visit his mother who had been reborn there.

Traditionally this day also marks the end of the summer retreat. Every year, during the summer months, Buddha did a three-month retreat with his disciples. His reason for doing this was to avoid harming insects and other animals…

If we go out a lot during the summer months we will naturally kill more insects and other animals than at other times of the year. The nature of Buddhadharma is compassion – an unbiased compassion that is not just for human beings but for every living being, including animals.

In fact, we should have stronger compassion for animals than for human beings because animals suffer more. Human beings have better conditions and are more fortunate than animals. Because animals have so much suffering and no freedom, out of compassion Buddhists should try not to kill or disturb them. So, for three months during the summer, Buddha advised his disciples to retreat, staying always inside and living carefully and conscientiously.

One year during the annual summer retreat Buddha went to the Land of the Thirty-three Heavens. After his mother died she had taken rebirth in this god realm, so-called because it has thirty-three different types of gods.

The king of this realm is called Indra. The Indra who was king at that time was also Buddha’s disciple and he invited Buddha to go there. So Buddha went to benefit his mother and also, at Indra’s request, to benefit the other gods living there. He stayed three months, and then returned on this day.

This day is therefore very special. It is said that if we engage in any kind of virtuous action on this day it becomes especially powerful and our merit greatly increases. For example, if we offer one single light offering this action is multiplied to become millions of light offerings.

On this day we should especially remember Buddha’s kindness.

We now have the chance to abandon our self-grasping, which is the source of all suffering and problems. We have the wisdom that understands what self-grasping is, how it harms us and how to abandon it. All this knowledge and all our wisdom realizations come from the kindness of Buddha Shakyamuni.

All Je Tsongkhapa’s books are commentaries to Buddha Shakyamuni’s teachings. They help to clarify them and make it easier for us to understand them. Nowadays human beings are very intelligent and knowledgeable about how to develop and produce external things, but their understanding or wisdom about the profound Dharma of the inner spiritual path is very poor and weak. Je Tsongkhapa made it very easy for us to understand this. He clarified everything and made it easy for us to integrate all of Buddha’s teachings in a very practical way.

In reality, every teaching we study and practise comes fundamentally from Buddha Shakyamuni; all our wisdom that understands Dharma comes from his kindness. Realizing this we should dedicate all the virtues we accumulate today to fulfilling his wish.

What is Buddha’s wish? His main wish is that his teachings flourish throughout the world so that all living beings find release from the suffering ocean of samsara and attain permanent inner peace, permanent freedom, and eventually great enlightenment. Because the real method to find release from samsara is to practice Buddha’s teachings, unless they flourish in this world it is impossible to attain actual liberation.

Buddha doesn’t need anything for himself because he has completed everything – he has fulfilled all his personal wishes. His sole remaining wish is that living beings attain liberation and enlightenment through practicing his teachings. In other words, his wish is for pure Buddhadharma to flourish throughout the world to free all living beings from every kind of problem and suffering.

We should therefore dedicate all the virtues we accumulate today for this purpose. 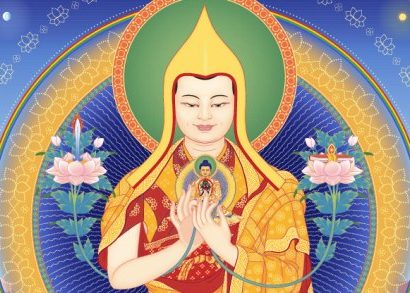 The following is extracted from a talk given by Venerable Geshe Kelsang Gyatso on Je Tsongkhapa Day 1996 at Manjushri KMC:

‘Before Je Tsongkhapa appeared in Tibet, many Tibetan scholars and practitioners already knew that he was coming because of predictions made by Buddha Shakyamuni that in the future Manjushri would appear as the Tibetan Lama, Je Tsongkhapa…

You may recall that Buddha in his Root Tantra of Manjushri said to his Heart Disciple Manjushri:

After I pass away
And my pure doctrine is absent,
You will appear as an ordinary being,
Performing the deeds of a Buddha
And establishing the Joyful Land, the great Protector,
In the Land of the Snows.

‘The Land of the Snows’ refers to Tibet, and ‘Joyful Land’ refers both to Ganden Monastery and to the Ganden doctrine, the great Protector.

Buddha was saying that in the future, after he had passed away and his pure doctrine was finished, at that time Manjushri would appear in the aspect of an ordinary being but would perform exactly the same actions as a Buddha, and in particular he would establish Ganden Monastery and the great Protector, the Ganden doctrine, or Je Tsongkhapa’s Dharma, in Tibet.

If we memorize and contemplate deeply the meaning of Buddha’s words it will give us much advice, a good feeling, and a profound understanding. When he says that Manjushri would appear as an ordinary being but perform the deeds of a Buddha, he is describing Je Tsongkhapa’s special characteristic.

Although Je Tsongkhapa had the highest realisations of Highest Yoga Tantra he never physically showed that he was a Tantric yogi. He lived like as an ordinary pure practitioner, emphasising by his outward appearance the pure practice of moral discipline. However, his daily life was that of a Bodhisattva, and his inner realisation of experiencing the union of great bliss and emptiness day and night was the very essence of Highest Yoga Tantra

He had already gained this experience many lifetimes previously, but he appeared as a Tibetan Lama for the purpose of showing clearly a special example of how to begin, make progress on, and complete the stages of the path to enlightenment.

He appeared as an ordinary human being for the benefit of his future followers. Buddha Shakyamuni also did the same. He took birth as an apparently ordinary human being, became ordained, engaged in meditation, and finally demonstrated attaining enlightenment.

Most of you know the story of Buddha’s life: how he got ordained, engaged in meditation retreat for six years, and finally under the Bodhi Tree at Bodh Gaya attained enlightenment.

When the time came for him to leave his old, gross body that had come from his ordinary parents, ordinary people thought he was dying, but at that time instead of experiencing the ordinary clear light of death that is experienced by ordinary beings during the death process, he experienced the ultimate example clear light.

Today we remember Je Tsongkhapa’s great kindness and dedicate all our virtuous actions including this evening’s puja so that his Dharma will flourish throughout the world and provide many living beings with the great opportunity to attain liberation and full enlightenment. 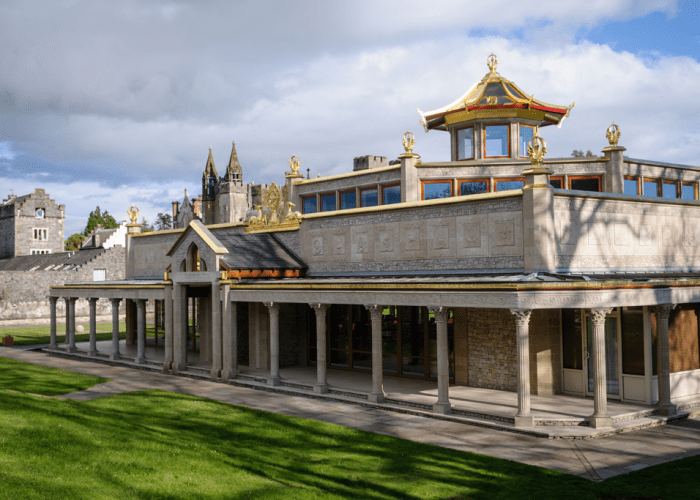 Special events are held to raise funds for the project and prayers are made for the success and flourishing of Kadam Dharma in order to bring about world peace.

The following extract from a talk by Venerable Geshe Kelsang Gyatso explains the importance of temples and how they benefit all living beings in this and future generations:

For these reasons I recommend building Temples as one of the best ways of benefiting other living beings.

The main function of a Temple is that those who see it or develop faith in it will receive special blessings.

Therefore I can say that from my side, or from our side, this is the best public benefit or public service.

We accomplished this Temple so that even people who have no interest in teachings will receive some benefit from Buddhism – anyone, any being.

It doesn’t matter whether they have faith or not. Whoever sees a representation of the Pure Land of Buddha, and representations of Buddha’s form body, mind, and speech, will receive blessings.’